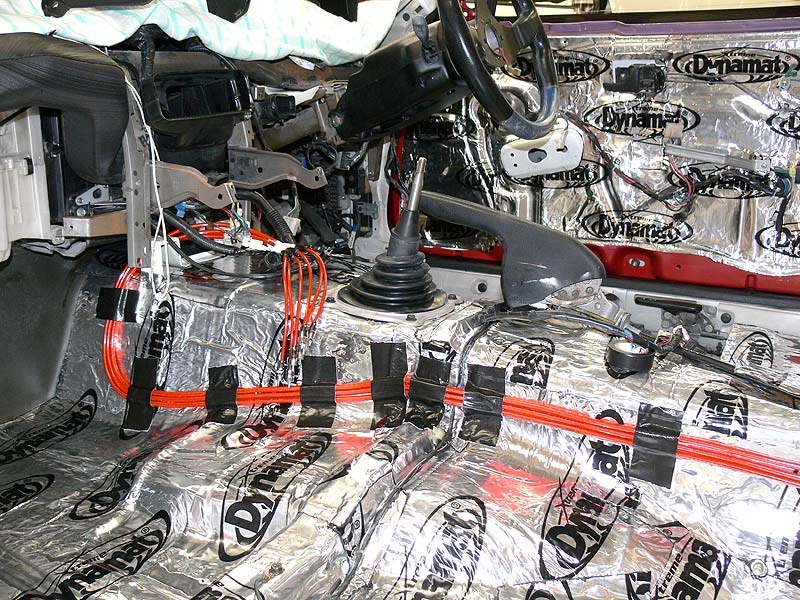 Wow, two posts in less than a week...I'm trying to make amends. And so as part of the interior install, between doing the Dynamat and putting the carpets in, the wiring for the impending stereo needed to be installed. So last Friday was the day. First up I went for a quick a trip down to JB Hifi in Cannington to get myself some quality interconnects that run the signal from the deck through to the boot where the amplifiers will be installed. After doing a quick bit of research on what to use, it was down to Stinger and Aepro (?). As luck would have it, JB's had the Stinger Helix in stock...these being their higher end product, and in a nice red to boot. Therefore if they do get seen, at least they won't stand out like dog's bollocks. Back at the workshop the fun begins.

After a quick run down from Marc Palmer (all-round nice guy and electronics whizz, also C-Red Workshop Manager) on where I should be running the cables, I set to work running them out. First up were the Stinger interconnects (RCA's) which have been run down the passenger side of the tunnel, across the back of the rear footwell and up and over the wheel arch into the boot (basically following one of the stock wiring loom paths).

Next was a 7-wire multi-core cable which we've run for future needs if they should arise. This was run along the same path as the stock loom on the drivers' side of the car, followed by the speaker cables which run down each side of the car and up and over the wheel arches.

Also on Friday I received my next box of Dynamat (3rd so far) and before leaving the post office, I had it weighed. It came in at a smidge of 10kg. Not bad really considering that could be the difference between my planned stereo setup, and one with twice as much weight. And of course the amount of deadening in the car really has made a huge difference already.

Saturday I managed to get the rear seat area and wheel arches covered so next up will be the boot. I reckon we're getting pretty close to getting the interior back it. So far I'm undecided on whether to get the rear seats and door trim panels retrimmed before Autosalon. The interior I picked up has the option CA-version velour material with a grey and slightly red stripe patten. It's nice, but the grey doesn't quite match the same grey as the GT-R seats, but I may forego that...but as mentioned, undecided.

For the stereo, I'm looking to go something fairly basic, but still punchy starting out with an Alpine SWX-1042D Type-X 10" Subwoofer. The front splits will be the Alpine DLC-177R DDLinear 6.5" Component 2-Way Speaker System (6.5" mid-bass and tweeter) as after listening to the Type-X splits, these has a more appropriate sound for my liking. The head unit will again be Alpine - and having just spied the new Alpine iDA-X001 Digital Media Receiver on their website, I think that's the winner (oh, it's basically an interface to an iPod and Tuner with no CD player...more info). Now rather than installing some huge amps which weight a lot, I thought I claw some weight savings back from the Dynamat by going for the diminutive Alpine PDX Digital Amplifiers. In this case I'll be going an Alpine PDX-1.1000 Mono Power Amp for the subwoofer and Alpine PDX-2.150 2/1 Channel Power Amp to run the splits. All-in-all a very nicely rounded system methinks. Now I just need to find a place that will give me a decent price for it all.

Oh, and something I didn't mention last week and that's about tyres. I originally had a set of Federal SS595 tyres installed on the rims, but with my plan to do a bit of track work, and the desire to have something that is both street and track pliable in a 50:50 split, I've just had some new tyres put on. These are again Federals, but not the SS595RS Ultra High Performance tyre - this should give me what I'm after. Oh, and an unashamed plug goes to Shane at Exley's Motorsports Tyres down in Willeton for supply and fitting these up.

Until the next episode.

« Next: Finally some interior goes in