The show is finished, but the journey continues… 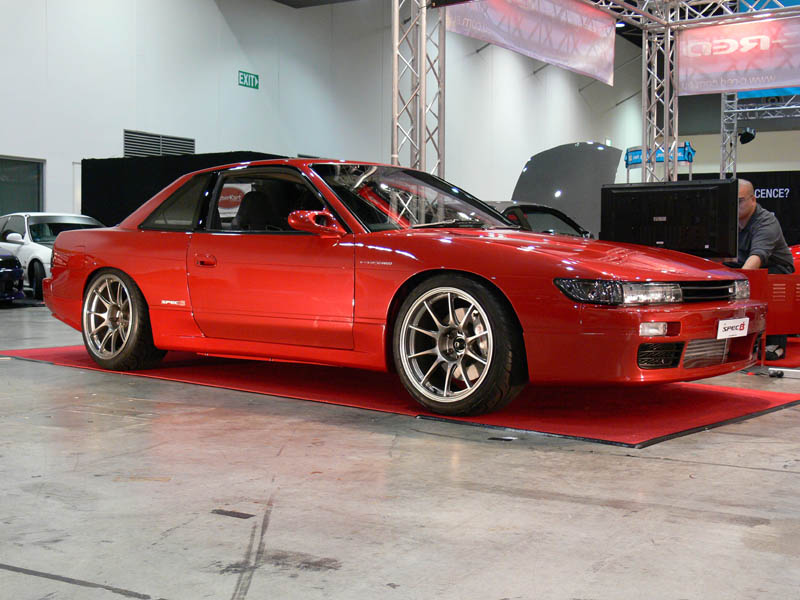 Phew, I'm glad that's over. Yep...referring to the hectic lead up to Perth Autosalon 2007 that I had last week. The target was to get the car pretty much 100% completed, but we had to settle for about 85%. Visually it was complete, but due to the short amount of time left over we didn't manage to turn the engine over and troubleshoot in time so we left it at that.

The week started out with a list, and by Friday afternoon I think I'd managed to cross off about 50% of the items...some big, some small. I was just happy enough to get it looking like it should, even if only the rear exhaust section was just hanging on the rubbers. But during this week, I did have the help of some top technicians in the form of C-Red's Marc, Josh and resident welding gnome. Even though they were busy with the three other C-Red cars, they managed to find time to point me in the right direction when needed...I can only say thank you all so much.

Once we had the cars into the convention centre, it was time for me to pay attention to the bodywork on SILLBEER. I had cleaned up everything else before going on the truck, but left the paint until I was in situ. Thanks again go to 200SXY from Silvia...you're tops. Not having had to really worry about show quality paint before, she kindly lent me her Meguires products and microfibre clothes to initially clean the paint work (which was filthy from sitting in a workshop for 2yrs) and then on Saturday morning, the wax to finish the job. I was completely surprised by how much of a difference these two products made. There's still a few blemishes on the paintwork, but with a proper buff and detail I reckon we can turn it up a few notches more.

The weekend was great in all and I came away with an award for 'Best Overall Engineering' which I was surprised at considering the car wasn't even running. But I suppose they saw the quality of parts and work that was put in by all and sundry.

Am I happy with the result so far? You betcha. The comfiness of the interior is what has most surprised me. The use of the R34 GT-R seats was spot on, and the softer materials used in the trimming and carpets has transformed an interior that I remember as being quite dated, cold and hard to something that you don't mind spending time in. Of course the quality sounds coming from the thumping stereo help.

So to end this post, I'd like to thank a few people. First and foremost would be my wife and three kids for supporting my efforts thus far with the car...you patience has been worthy of your own trophy. I've already thanked the boys at C-Red, but additional thanks go to Jeff Ash, the MD for C-Red...cheers buddy.To Roy Robinson - now heading up Kensei for his work and support in the earlier stages of the project (larv ewe). To Greg Dally for sitting in during the early parts of this year and knocking a lot of work off the list. To Pete and Chris at Trimcare for doing an awesome job on the interior trim work and carpets. Daniel Jurkovic from Audio Addict for his immaculate work with the stereo install. Phil Foster from A.F.M. Enterprises for helping out with some final painting bits (he also painted the C RED S14 with 1JZ). SilviaWA members for continuous support and kind words. And last but not least...myself, cause it was hard work.

Where to from here you might ask? Engine will be first off the rank followed by a run-in tune. Then we'll be getting the help of an engineer to see what we need to get done to have it all registered. Then some kms to run everything in and shakedown support systems. And somewhere in there a decent alignment and tweaks to the suspension to get a baseline to work from with regard to tuning the chassis.

Happy to help any time Grandpa… once I move down I can spend a bit more time showing you some of the good stuff to really get the paint, rims and tyres looking there best and lasting!

She looked gorgeous on the day though and full credit to you for the elbow grease you put in.
——-

Hahaha, wasn’t so much elbow grease than sweat. I was drenched after doing that polishing and my shoulders are still a little sore!

Thanks again, I’d appreciate some more tutoring on keeping the paint in top condition.

« Next: Sunset Photos (before Autosalon)