Still no bolting together - but I can feel it getting close 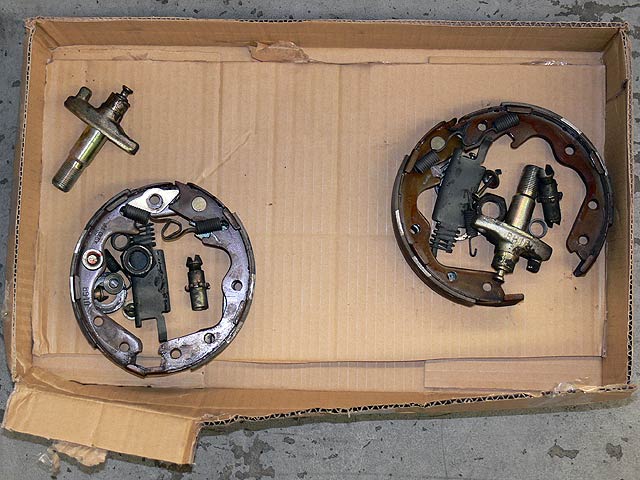 I know I mentioned that I was going to be bolting some stuff together on Saturday, but it just wasn't meant to be. Roy called on Friday and said that I'd have to look at getting the GT-R hubs out from the back corner, as the Just Jap 5-stud ones won't work with the GT-R half-shafts (or something to that affect). So first up I go the hub carriers and hubs etc off of the subframe that I'd been using, then it was a matter of taking it all apart. Thankfully it all came off fairly easily, with Roy using the hub carriers for another C-Red project that's being bolted together for the Perth Autosalon at the end of this month.

While I was at it I had to disassemble the handbrake assemblies, picture above. These basically are a small drum brake system (mechanical rather than hydraulic though) that pushes the drums against the inside of the brake disc/rotor. The hubs themselves were a little rusty in parts, so after a little bit of a scrub with a drill and nylon abrasion wheel/brush, it was masked and hit with a light coating of black paint. Also part of this lot were the rear brake rotor guards, which after a little bit of bending back into shape, a good clean with the prepsol, were also treated to a quick coat of satin black too. 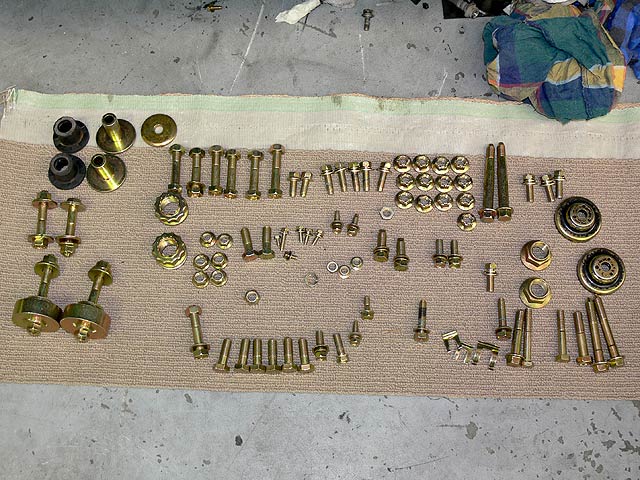 I mentioned also in my last post about getting a box of bolts etc re-coated in zinc (gold). Here they are, by no means are they the last of them, but it's a good start. Of course as soon as I looked under the car again, I spotted more that I should have done. Oh well, I know I'll have to do another batch anyway.

« Next: Drum and Bass, I mean Hubs and Brakes (sorry, bad humour friday)