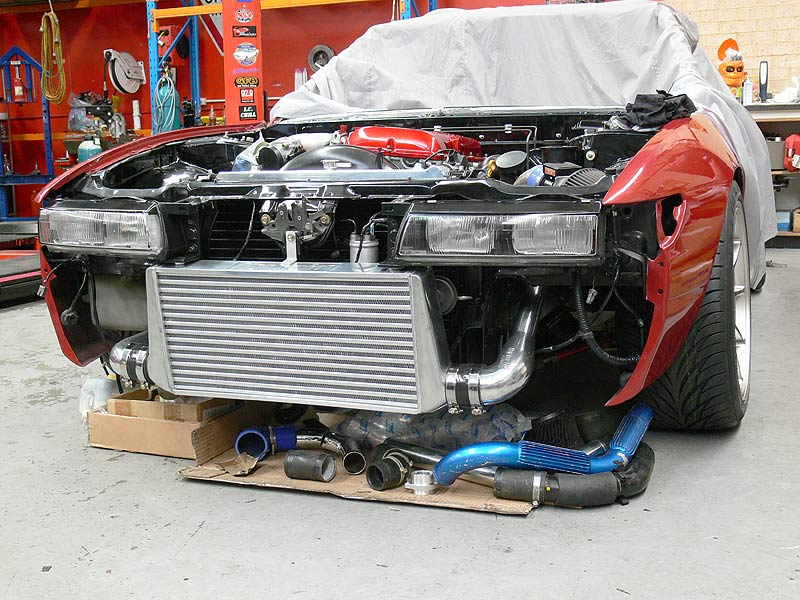 Well it had to happen, especially after the high of the last post...seeing Sillbeer in the sun...a boring bit has descended. Not that it's any less significant, I mean without a wiper motor I'd be totally fubar in the rain. But the headlights do look mean.

So for this post I'm reporting on 3 main things, the first being the finding, cleaning and fitting of a wiper motor. I'm glad there was only one, because it was a pain to clean. For those looking to undertake such a project, parts that have the oiliest coating, are usually easiest to clean and bring up like new. This is because the metal hasn't had a chance to corrode. Unfortunately the wiper motor had corrosion on the aluminium casing and the painted cover so it took about an hour or so to clean up. I did contemplate just buying a new one, but that would cost easily between $200-$300.

The next thing to report on is the intercooler. It's now mounted (as seen in the top pic) and the attention to detail on the top mount is amazing. The boys went to the effort of cutting the bracket around the shape of the logo (following the shape of the 'b'). I mean you'll never see if once the bumper is on, but you'll see it now:

And lastly is a few odds and sods. The headlights have been cleaned up with some degreaser and doused with silicon spray (ie. tyre shine) to give some moisture back into the plastics. The power steering reservoir was also given a clean, sand and paint along with all the hoses also getting a good coating of silicon spray. The original intention was to mount the white plastic reservoir from an S15 Silvia/200SX, but it was going to be too much of a pain to fabricate and modify mounts when this was going to do just as well. Not that you can see in this set of photos, I've also found, cleaned and silicon'd a carbon canister and hoses which is now mounted in place next to the radiator. And finally, with the necessity of monitoring engine vitals a must, the water temp sensor has been mounted. I had bought a water temp sensor adaptor which usually would get mounted on a cut and shut top radiator hose, but instead some bright spark at C-Red suggested mounting on the top of the pipe leading into the thermostat where there's a small flat spot. So it was drilled and tapped a hole and mounted up the sensor - looks and fits mint.

Oh, and a start was made on the rest of the intercooler piping which has been continuing on this week with the mounting of a K&N; Filter (test fit for time being) and the Z32 (300ZX) Airflow Meter. The main deal with this is that we have to mount the huge GReddy Type-R Blow-off Valve somewhere. Having just been down the workshop at lunch, I must say the solution they've come up with looks fantastic and will work a treat. I was sworn not to post pics until it's all welded, blasted and painted, so you'll just have to wait until later next week.

So that's it for this week, wish everyone a happy easter period and please drive safely.