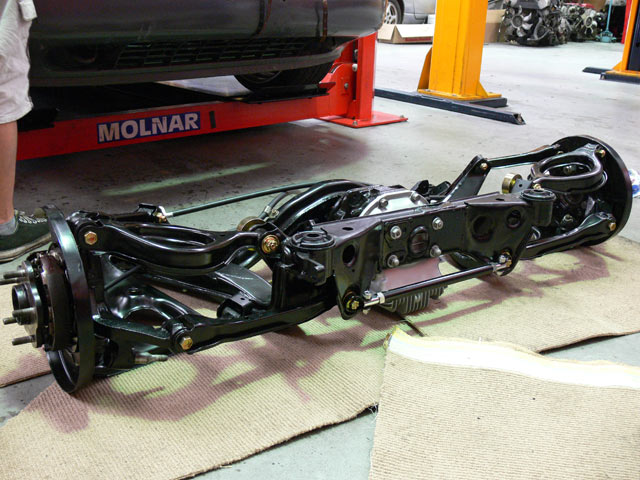 So it's been a while since my last post, but with more renovations going on and Autosalon now out of the road, I got back into the workshop for a full day to complete the rear end assembly. It all went together fairly smoothly, with Roy helping me out with one side of the hand brake assemblies (from an R33 GT-R) before I did the other under his watchful eye. Of course this was after we figured out that I had both the hubs and the hand brake pivot on the wrong sides (left on right and right on left)...der! Then came another minor hiccup...the rear lower control arms. Now after burning out the old crusty bushes with an oxy acetylene torch and repainting up nicely, I put some new bushes in one side only to find out they weren't going to fit! They were from an R32 GT-R and for some reason I had got them mixed up ages ago (about 12mths ago). I went and grabbed the originals, quickly gave it a clean up and coat of paint, and I'll redo the bushes when I replace all the arms with the Kazama ones I have on back-order. Here are some pics mid and after assembly, minus the half shafts which I missed out until someone mentioned I had better put them in then rather than after it was bolted up.

The handbrake cables used were new Nissan R33 Skyline GTSt, please check new prices from Nissan before forking out for second hand ones as I've heard of some used ones going for same price as new. So once it was all together, we lifted it onto a trolley jack, wheeled it under the car, lined it up and bolted it in. Finally, I felt as though I had achieved something. Although now that it's bolted in, I know I'm going to have to take apart the outside arm assemblies anyway to replace all the arms - but at least it looks like I've done something. Pics of it bolted in:

After a short wait, my new OS Giken STR (STR2C) Twin-plate Clutch arrived, and damn it's beautiful (as much as a clutch can be). Just a recap about the clutch for those that missed it previously:


The New OS Giken STR series can handle up to 600hp, yet retains drivability very close to standard with 30% lighter pedal effort than most multi-plate clutches. By using special new plate and diaphragm designs, OS Giken has achieved ample power handling with just 715kg clamping pressure. This makes the STR series perfect for everyday driving applications, along with most race and drift applications.

A few other bits and pieces have come in too. The DBA4000 discs for the front brakes are now in, will take pics when I test fit them up. I purchased a Cusco OST Brace - for those who haven't heard of these, it mates up with a Cusco OS Rear Strut Tower Brace and adds two additional arms to tie the struts to the floor of the boot in a triangle configuration. These will need to be refinished as per my other braces (black wrinkle finish on the bar and semi-gloss on the plate). I've also purchased a kit that allows me to do my own Zinc electroplating of metal parts, saving me time in dropping them down to the platers (takes about 60mins to do parts in a bucket on site).

Not sure what's next, I know I have a lot of painting still to do (Sard fuel surge tank, intercooler, IC pipes), but also want to get the front engine support in and start on bolting the front suspension together.

Thank you heaps for the info!!! Cars are so easy to pull apart but putting them back together is not! Very handy tips and the images helped heaps also! Chur

« Next: Front ended...but not finished.