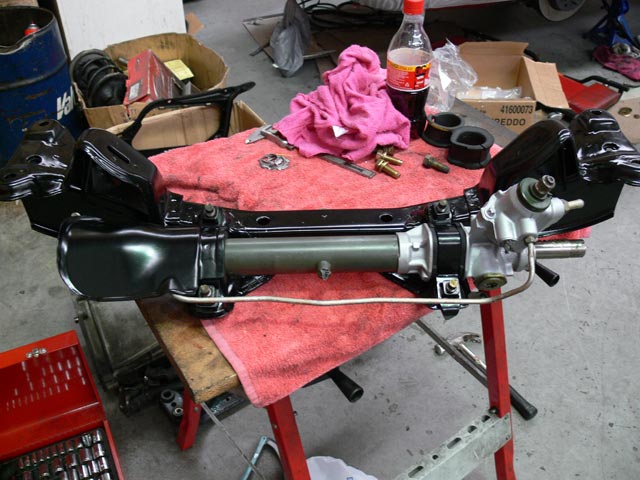 After working on the rear end last week, it was time to move up to the front. I was really nice having all the parts all cleaned and painted ready to be bolted back up to the car...was a matter of picking them up and bolting them in. Started on Saturday morning by removing the Tie Rods from the S15 Power Steering Rack. These are known to be quite weak (ie. bend easily) when hitting curbs/ripple strips at speed, so they'll be replaced with Kazama Super Strength Tie Rods (plus Super Tie Rod Ends). Once removed, it was bolted up to the S13 engine crossmember. There is very little difference between the S13 and S15 crossmembers, so it bolted straight up using the S13 mounts and brackets. After a quick wipe down, I located the nuts needed, applied a bit of anti-seize to the threads and bolted it up. Woohoo *dances a jig*. 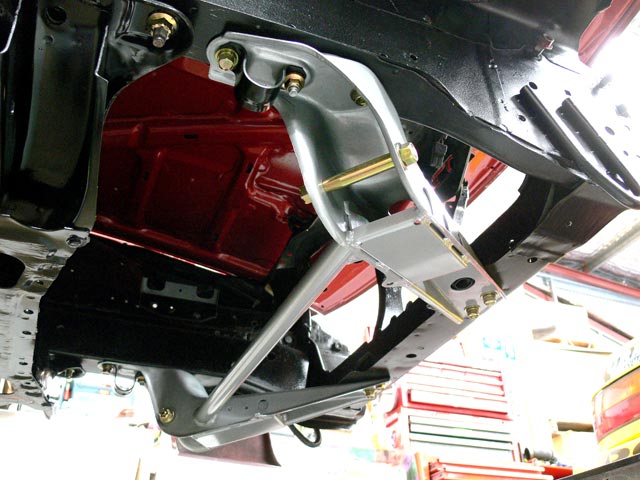 Next came the Nismo Power Brace, again a matter of selecting the correct nuts and bolts (that had been re-plated) and bolting it into place. As you can see I've also put the castor rod bolts in place so I don't lose them and have also attached the sway bar bracket mounts as well. This way I won't have to go searching for them when it comes time to bolt that bit in. 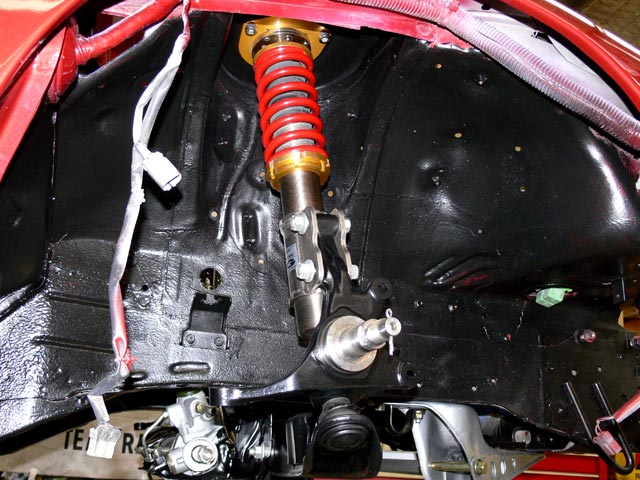 Last part of the day was tracking down some crucial nuts and bolts for the strut assembly. Luckily there was a full S13 front assembly down the back of the workshop I could use, so I raped that for the inner mounting bolts for the Nismo Lower Control Arms and the two bolts to mount the top of the hub assembly/spindle to the RG coilover. These will need to be replated, so for the time being I've sand blasted them and will plate when I get my new DIY electroplating kit up and running. I did have to make a quick trip down the parts store however for some new mounting nuts for the top of the coilover (I'll replace these later with better self-locking ones). It then took about 5 minutes each side to bolt what I had into place.

So next step is get my plating kit running, the manual is pretty huge as it covers the basics of electroplating as well as the specific kind you have the kit for. The kit has come from a US company called Caswell (http://www.caswellplating.com/) who have an Australian distributor in Melbourne. This will allow me to do the plating when I need it and have an exterior grade plating done in 60 minutes.

Hey Brendan,
what parts did you need off the R33 GTST to fit the Rear hub/drum brake assembly ??

The rear hub/drum brake assembly was actually off of an R33 GT-R, but I belive the R33 GTSt to be similar if not the same. There’s more information in a previous post about the parts, but off the top of my head, other than the drum brake parts themselves, I only needed to use an R33 GTSt handbrake (ebrake) cable. It’s longer than the standard S13 one.