Phew, that was a hell of a break. Didn't think it had been that long. Well in the time between the last post and now the car has been my regular daily driver to and from work. So far the car has performed pretty well other than the niggles from those unknown camshafts that were installed in the initial build. I've also had a couple of weeks holiday visiting sunny Melbourne for the Australian F1 Grand Prix followed by a week on Hamilton Island - just the wife and I (our 3 kids stayed with their Nina).

While away, the car stayed at C-Red and had the camshafts changed over for some brand spanking new GReddy Performance Camshaft Pro items. The specs on these are as follows:

I had a chance to drive it around for a few days while I waited for the appointment at the tuners and although the idle was hunting, it was a lot smoother than with the previous camshafts that were in there. Airconditioning wasn't a problem anymore either in the traffic, whereas before if I had it on in peak hour, the engine would constantly stall (it was something that we couldn't get rid of).

So I dropped the car off for a couple of days at Allstar Garage in the capable hands of Sean. The last time it was in, the changing of the camshaft timing using the sprockets was a complete waste of time, this time though, with a bit cleaning up of the base tune we finally had a decent improvement. See the dyno sheet below for the results. The thin lines are the previous camshafts and the thick lines are with the new GReddy's in play. 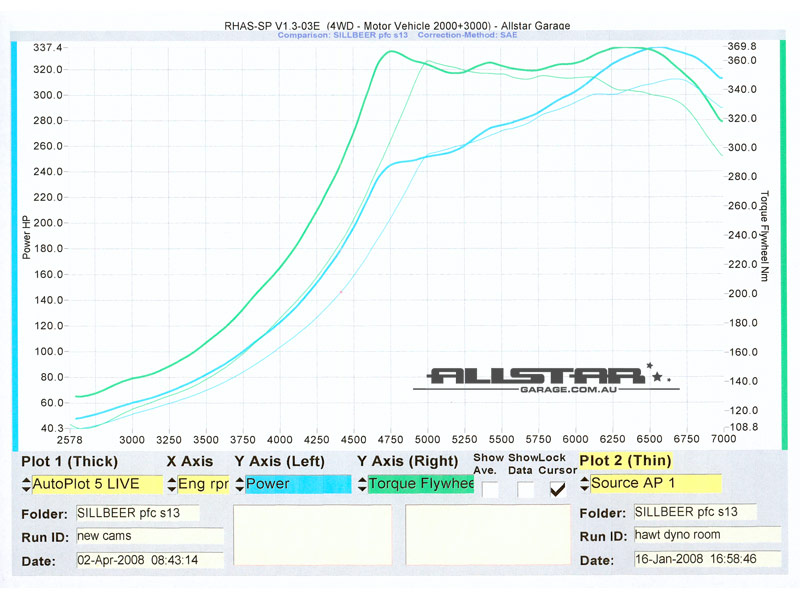 As for what the bum dyno says, well it's all good there too. Once on boost, the power seems endless, and now I can change gears and be right on top of things again. I think there could be more response gained from going slightly smaller camshafts, but for the time being, we'll see how we go with this.

I'll be endeavouring to get down to the strip soon to see what she'll do. But remember I'll be a drag virgin so don't set your hopes too high. I also need to get to a weigh bridge and see what it all weighs too. Also on the cards is a trip up to Barbagallo Raceway with No Limits Motorsport and the odd fang out at AHG in motorkhana and circuit time attack. If fundage allows, I'm also looking at competing in a tarmac rally called the Alphera Dutton Rally when it comes to Perth in July.

A couple of items are still sitting in the wings that need to be done. Firstly will be fitting the boost gauge...although I haven't missed having one, it'll round out the cabin nicely, the Meter Hood will need to be purchased first though. When I fit that, I also need to fix the fuel gauge as that's way out of wack. Oh, and the vents in the rear parcel shelf need to be affixed to the new shelf material because each time I take a sharp turn they go flying from side to side.

I also had a visit from a well known magazine photographer on the Australian import/four cylinder scene back in late February, so look forward to seeing my car staring back at you on the newstands in the within the next couple of months. Will try and get permission to post pics for those people overseas too.

Drive safe, and talk next time.

« Next: VOTE for SILLBEER in Zoo Weekly Real Cars Competition