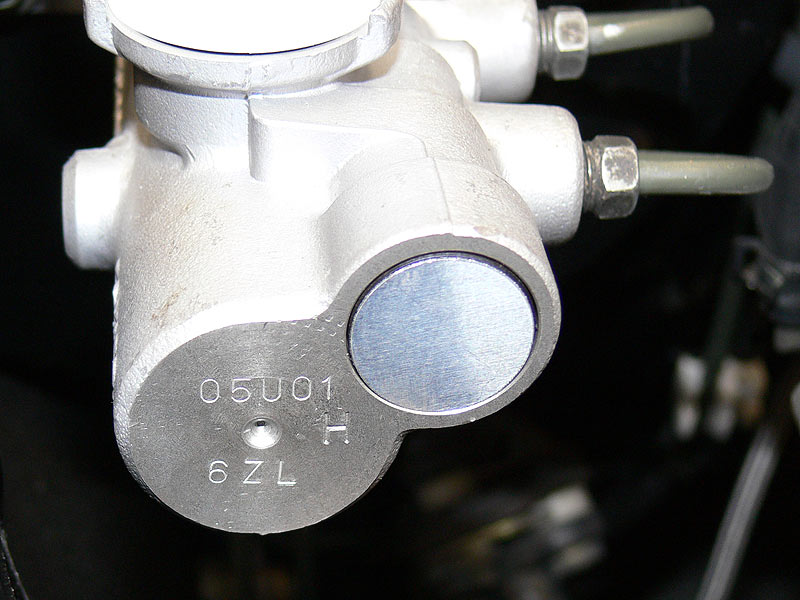 OK so a lot of you would already be aware that I'm running the front and rear Brembo calipers (with DBA4000 slotted rotors) from an R33 GT-R on Sillbeer (couple of pics here). Unfortunately the model of Silvia I've used as a base rolled out of the Nissan factory without ABS. Now this wouldn't seem like such a problem, but then I need to be able to fill these massive calipers (in comparison to the stock) ones with decent pressure and the stock Silvia brake master cylinder (BMC) just would not be up to the task with a resulting deep pedal. The other problem being that non-ABS cars need three ports on the BMC, 1 for the rear circuit and two for the front circuit. In the Nissan line up there's little choice in the larger sized BMC's available.

So the hunt was on for a larger BMC. Now there's quite a number of articles from the USA that says that their Z32 300ZX NA version did come up with a 1" (BM50) and 1 1/16" (BM55) BMC, and has been used successfully on their S13 240SX cars with larger caliper kits...so that was the first direction I took. After looking at a number of the photos of this setup, it finally clicked that this just wouldn't work...they drive on the left hand side of the car...so the ports on the BMC are on the wrong side. This was backed up by the fact that Nissan Australia couldn't find anything in their parts database for an Australia equivalent. Back to the drawing board.

After a couple of weeks, another light blinked on at the end of the tunnel. I recalled that the R32 GT-R N1 came from the factory without ABS fitted. Now the N1 came in two basic versions. The first was based on the standard GT-R, and the second as I understand it was based on the V-spec and V-spec II versions, which used the same Brembo calipers as the R33 GT-R (which I'm using). Next was to find some pics of it...and after a bit of search on the Yahoo Japan auctions, I found some and this confirmed the existance of a 1" BM50 brake master cylinder with 3 ports on it. Yay. Now it was just a matter of finding the Nissan part number. Part of the clue came from these photos with some of the part number stamped onto the end of the BMC body. The other bits came from the Nissan Fast software.

After confirming that there were two numbers matching my requirements, a call to Northside Nissan in Perth confirmed their availability - which was affirmative ex-Japan. Pricing was reasonable at around $530 retail and about $450 trade. When we ordered, it wasn't sure which item of the above two would come in, but in the end we go the Tokico unit (46010-05U01). Here's the pics below of the brake master cylinder now all hooked up.

So for all those doing big brake conversions on your Nissan Silvia or Skylines which didn't have ABS, or you're wanting to remove the ABS, then this would seem to be the solution. Of course there's the subject of brake bias that is still to be tested, but that's all par for the course.

PS> Thanks to some of the boys in the Japan sub forum on Skylines Australia for your Japanese-to-English translation help.

How did the Brake master cylinder go? Was the brake bias weird? Did you have to change the brake booster or did it bolt straight onto the S13 one?

I only ask because i’ve got a soft brake pedal in my s13 after i installed R33 GTS-T calipers.

cafc_86 (nissansilvia.com)
.(JavaScript must be enabled to view this email address)

BMC went well, good solid brake pedal. Not too solid though so you can do good progressive braking. Bias is pretty good too.

If you’ve gone the R33 GTS-t calipers, then I have known people to use an R33 BMC as well with great success. Shouldn’t be as expensive and will be easier to find than the R32 GT-R N1. It should be a bolt on affair too like my one was.

I have used the original S13 booster, along with the BMC in question.

Not too sure about the R33GTSt boosters though.

hey bro ive got an R31 aussie which i have fitted an r33 BMC + Booster and now my pedal is rock hard! and my back brakes have locked up to the point that when driven 10km the rear disc become so hott that the paint from the Pads begins to flake off and start a fire! ah fuck any clues mate??? or any help to guide me in the right direction lol

Afraid I can't help you. Did you match the BMC to the calipers? If not then that would be where I'd be starting. Unless you're using an R33 BMC from say an NA R33 which I think from memory only came with single piston floating calipers, you really should be using twin-pots out the back and 4-pots at the front as per what would have been originally with that BMC/Booster combo.

Thanks for the article, I’m in the process of fitting z33 track brembo’s to my s14 and have been looking everywhere for a solution for the master cylinder without changing to a tilton setup.

Is the car RHD or LHD…I ask because I get quite a bit of international traffic. This BMC is for RHD applications, for LHD you could look towards one of the Z32 or other 4WD BMCs.

I’m in Australia so the car is RHD.
I’ve done a bit more reading and the factory BMC in the 350z is actually 17/16” so I might just go an ABS BM57 and split the front output with a T.

Will be cheaper and easier to get than the V-spec BMC and should also give closer to factory pedal feel with this setup from what I’ve read.

Jamie, that’s sweet, keep us up-to-date on the outcome. Would be good to add that sort of info/data to the bottom of this post. Especially knowing how the brake bias feels. What method are you using to mount the calipers…I assume dog bones (if so, where did you get them or have them made and what sort of cost)?

Josh here again, I spoke to you about the carpet and the fusebox!

I am currently running R32 GTR caliper (which iirc the same as R33 GTST anyway) but I think in the future I will be looking at a brembo setup like yours.

One other question, is your handbrake a drum handbrake?

If you wouldn’t mind could you please email me if thats okay? I don’t want to impose but you are possibly the most knowledgeable person I have found regarding this kind of stuff haha.

I believe that if you were going to stick with the GT-R calipers, then the extra cost of an R32 GT-R N1 BMC would be overkill. On the other hand, if you’re looking upgrade eventually to a larger caliper, then certainly look to go with the R32 GT-R N1 BMC instead.

My handbrake is indeed a drum brake setup from an R33 GT-R IIRC. The handbrake cable itself is from an R33 GTSt though (bought new from Nissan). Type in ‘handbrake’ into the search box at the top right and some of the earlier posts have some pics and info on it.

Are the brake ports on the same side, or opposite (for LHD vehicle)? Can you get a pic and part number? Would be good to have that sort of information for people looking for an equivalent LHD unit.

heres a link to the picture,

the ports are on the same side and configuration.

thanks very much for putting this tech article up.
Im doing the exact same brake upgrade as you and its been hard to find out what cylinder to use, even after talking with any guys in the bussines they could help me.

No problems Paul. I’ve been meaning to head down to the brake shop to see if it’s possible to get something to provide a little bit more front bias, because at the moment I feel it’s a a fraction too rear biased. I can stand on the anchors with both feet and it just won’t lock up the fronts at all -so I guess there’s potential for improvement.

Hey mate, just wanteed to know if theres any difference between the tokico and nabco and also if there was any fitting issues with the brake booster or the hard pipes. Thanks mate

Kai, I’m afraid I can’t comment on this with any particular authority regarding the differences, if any at all, between the Tokico and Nabco unit. I guess though as they’re listed down as essentially the same part, that they’re interchangeable. As for the hard pipes, and this is going back quite some time now, there wasn’t any huge issues, maybe just some ‘adjusting’.

Hey I just finished the BM50 swap on my Brembo caliper equipped s-chassis.  Wanted to ask you about the brake booster, any sort of upgrade on that is it best to just keep the original one on the car?  For reference the car is also non-abs from factory.

Hi Adam, to be honest I can’t recall whether we changed the brake booster or not when we did this change. It could be standard S13, but at the same time it could be an R33 GTSt brake booster. Apologies for not being able to answer with any more details.