A day at the racetrack…specifically Barbagallo Raceway 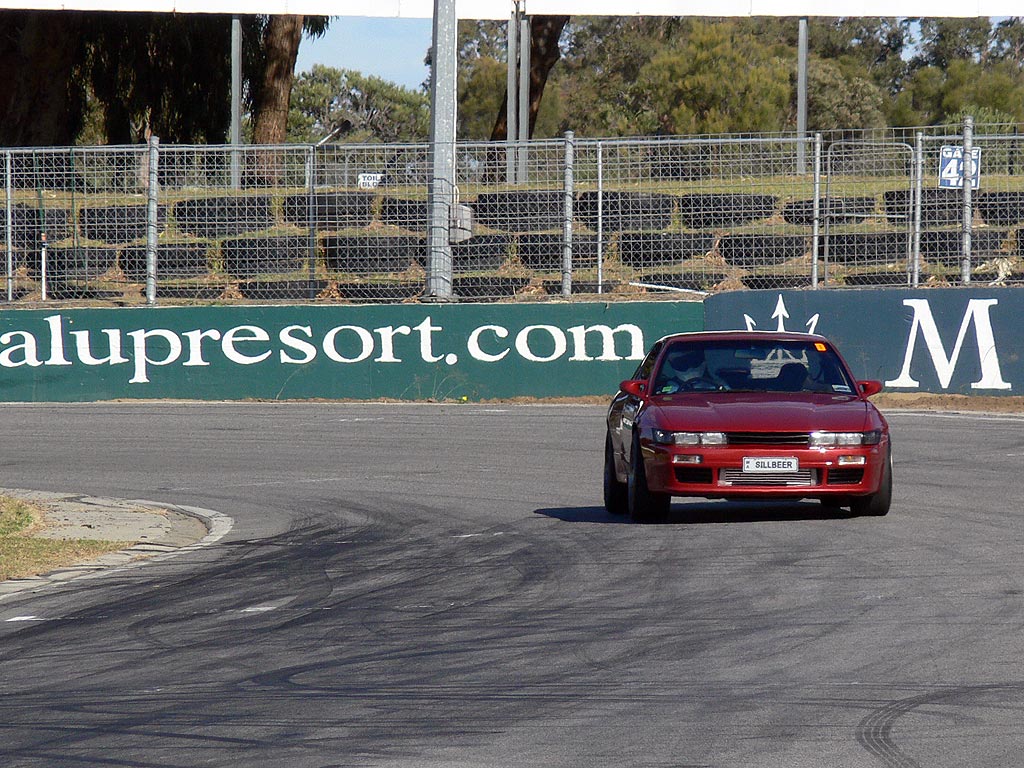 At the beginning of the week I was told that AFARCC were having a track day up at Barbagallo Raceway. I was also told that I should be there to have a go, so I did. It would be my first time on a full race track in SILLBEER and was really looking forward to pushing it hard...which I did all day. 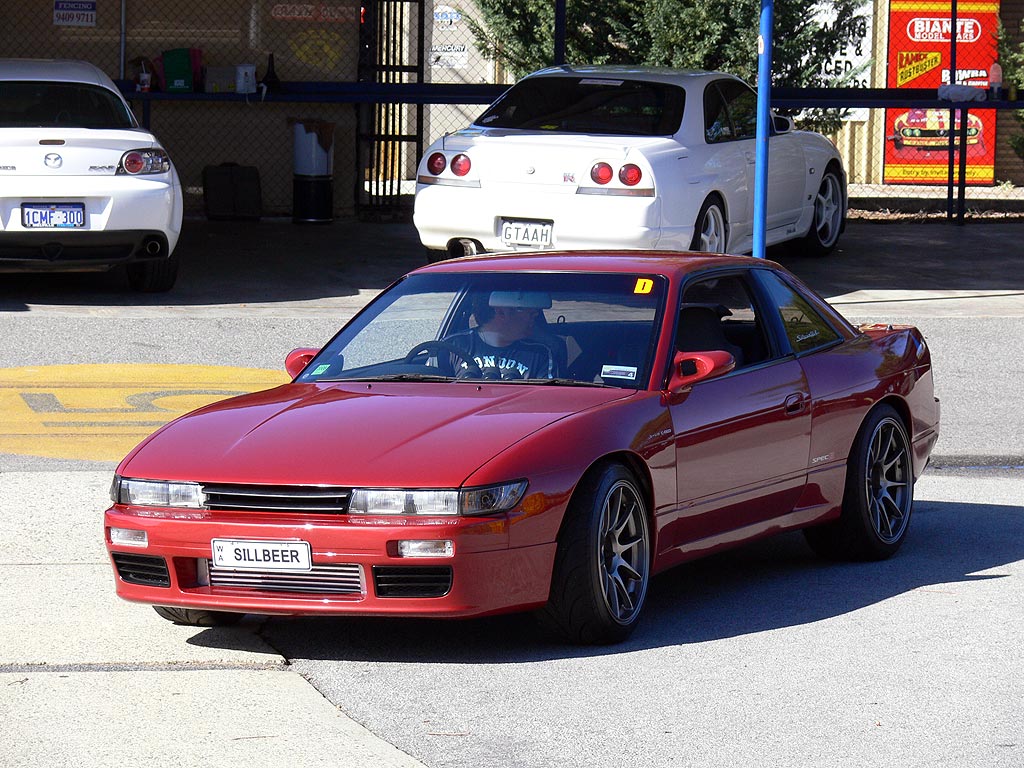 Before we started there was a little time before my group was to run on the track so I thought I'd check to see how much the car weighed. Now this was done with about 3/4 fuel in the tank and without me in the car...the result was 1313.5kg (2896 pounds). This isn't bad considering it has the full stereo still in there and all the Dynamat. 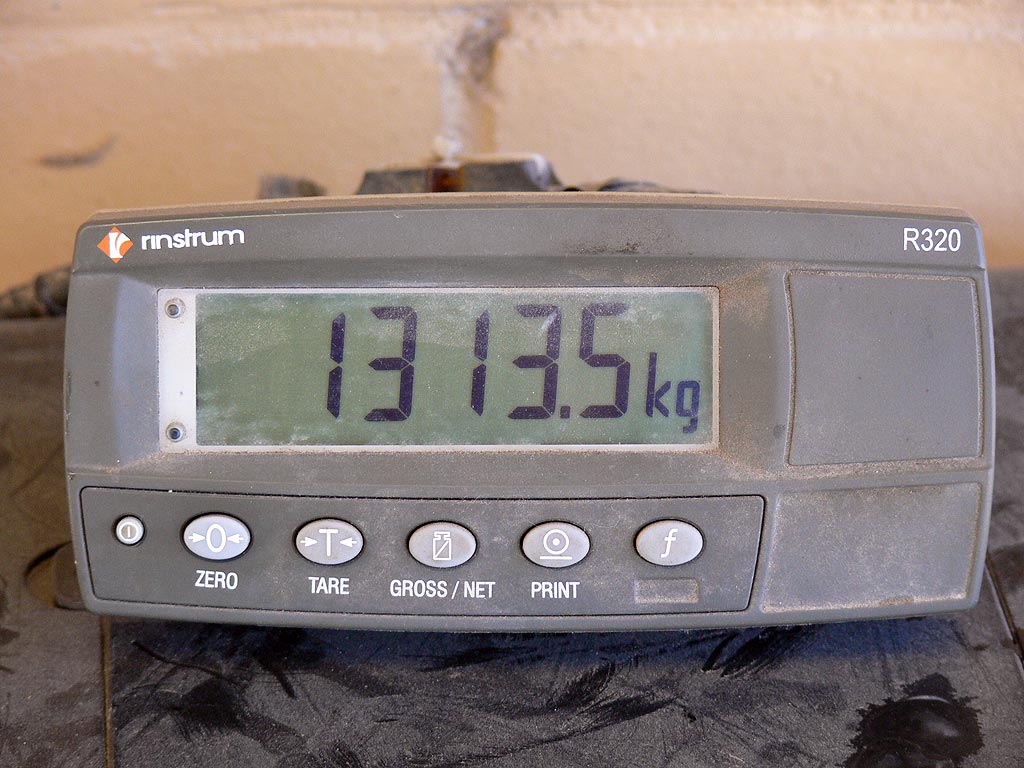 And then it was time for some hurt. My first time out in the morning didn't go too badly, running the short track. I did spin once on the left hander up the hill, just a little bit too much (was running in 3rd gear at the time so there was plenty of speed in it too).

Unfortunately part way through my second session, there was a tell tale PFFFT and I knew that a cooler hose had slipped off or split. Bugger! It turned out to be the rubber hose (the only rubber hose in the intake system...go figure) coming from the compressor housing. It runs right up next to the exhaust manifold and from the looks of the split it's been a long time coming. This was followed by a manic trip around all the local auto stores in the area trying to find something that would suit as it was a 2.5" (?) hose with a 135 degree bend. I did find something eventually at Supercheap Auto (of all places) in blue silicon which I cut down to fit. 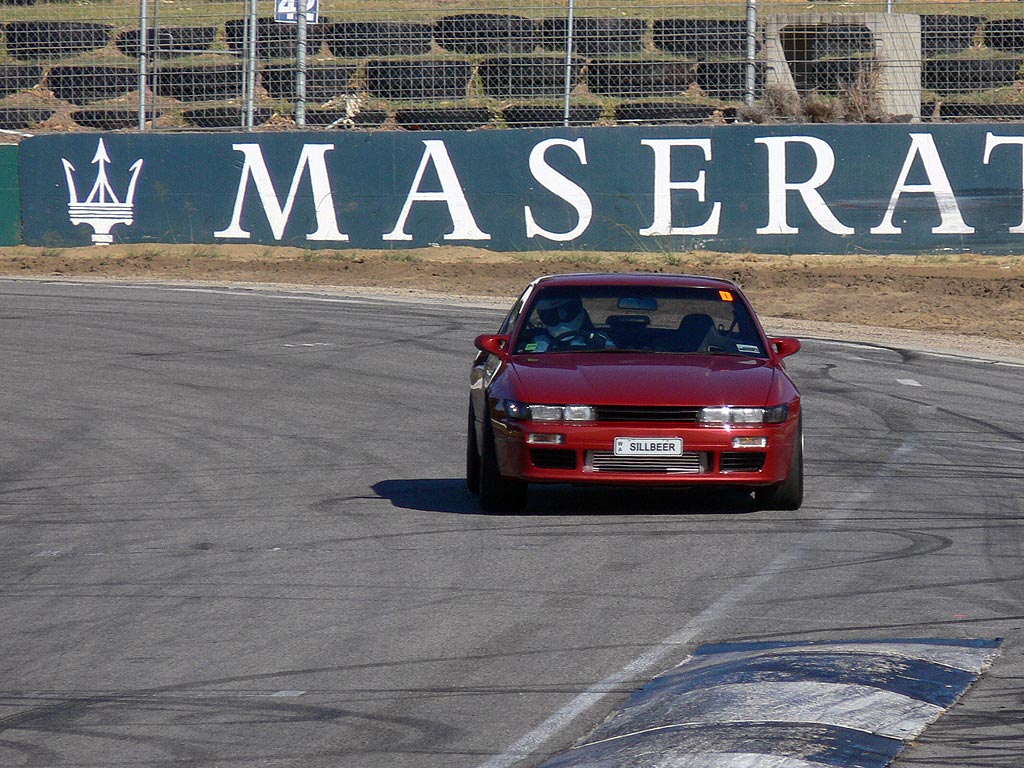 Back at the track, the pipes were all plumbed back in and we were on our way again for the afternoon...along with a switch to the long track. The session just after lunch Jeff Ash from C-Red was in the same group as me and he was in the hunt. Tucked up in a 500hp R33 GT-R running pretty crappy tyres, he peddled hard to catch up. Many laps I saw him close in only to manage to pull away exiting the corners...and seeing not the front, but the side of the GT-R as Jeff did his best to keep all fours drifting out from the apex. After 5 or so laps, he finally got onto my tail, and I let him pass before the final corner. See a succession of pics below:

A lap or so later and my fluids were beginning to get a little too hot with water heading over the 115C mark, and the oil just touching 95C so it was time to hit the pits

And finally parked up, you can see the grins from Jeff and I as we talked over what we'd just been up to. 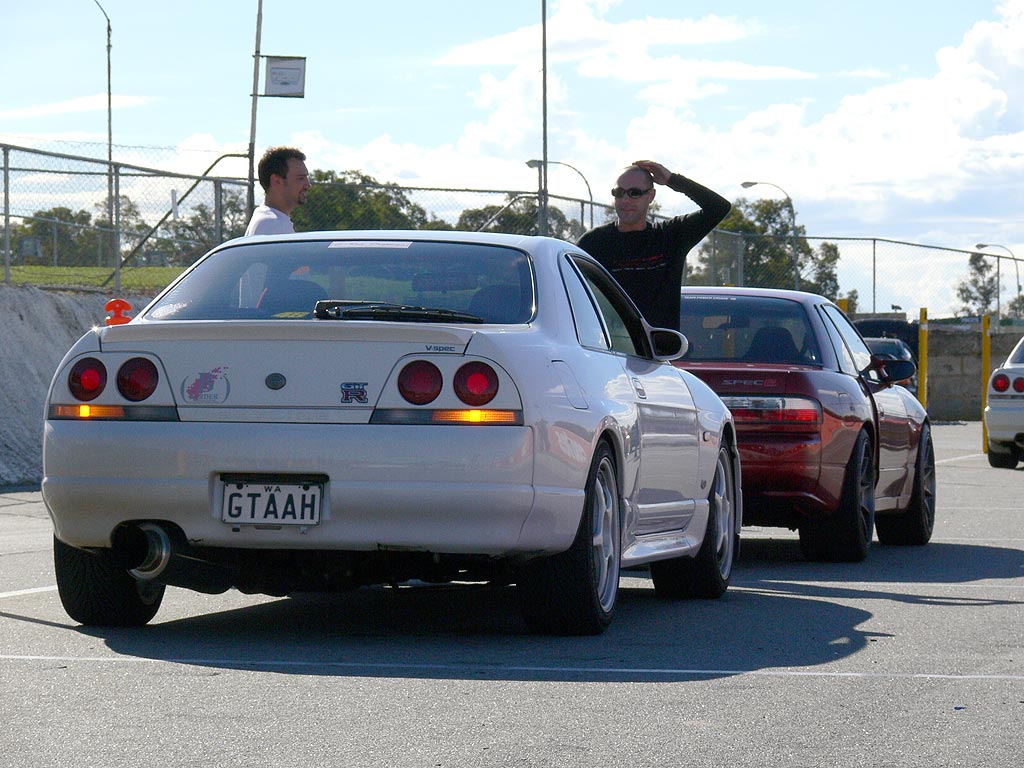 The rest of the afternoon was a hoot...until about 3.30pm when things turned for the worst. The long track at Barbagallo is pretty punishing affair with WOT using for about 90% of the track. The straight down the hill I was managing about 190km/h at the top of fourth before hammering the brakes and backing down through the gears. It was at one of these points coming into the final turn that one of the S13's achilles heels reared it's ugly head. The clutch fork release pivot snapped (confirmed later) and the day was over. I had enough momentum left to put it in neutral and coast into the pits.

It was probably a good thing anyway, as temps were getting warm again and after lifting the bonnet, there was quite a bit of oil on the intake side. We think it was from the oil cooler sandwich block seal failing under the conditions. Luckily someone had already called a tow truck (our friendly neighbourhood Gerrin from Anytime Towing) which they then no longer needed so I then had a way to get home. 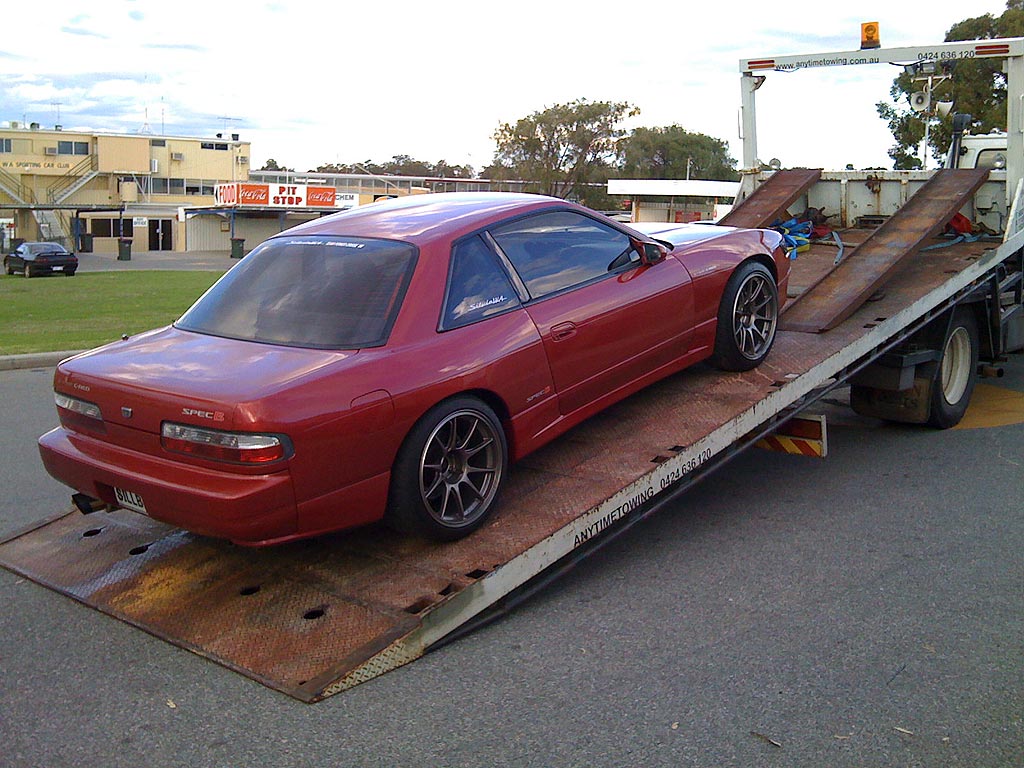 While up at eye height, it was easy to see the results of some reasonably heavy braking going on on the track...here we see the discs a lovely shade of blue.

Many thanks to Gerrin for getting the car and I home safely.

All in all though they day was bloody great and I look forward to getting the car back out on the track again soon.

UPDATE: In all the excitement I forgot to mention how good it was to drive! In one word...brilliant. The handling setup was nice and sharp, with good turn in but with so much grip in the rear I had to be on the ball ready to catch it. The brakes never had a problem all day with the killer B's performing flawlessly. The only downside was the engine dropping a cylinder or two if I took it too close to redline and taking a good 3-4 seconds to clear up again, thus the reason for the head change. Needless to say I had a grin on my mug for a week afterwards even with the release pivot failure.

« Next: Engine & Gearbox is out