Finally got back into the workshop on Saturday to strip the engine bay of all lines, master cylinder, booster etc etc. Main pain was finding all those little black plugs they spot around the engine bay - always wonder what they were actually meant for. While I was at it, I took the exhaust off as it was just hanging there anyway. The front guards have been removed also, as they'll be replaced by some nice wide body action from Wise Sports.

Pics of the engine bay at the end of the session:
- Top
- Driver's Side Bay
- Passenger Side Bay
- Front Left
- Front Right
- My Daughter was there to help me
- She loves the camera
- Beer O'Clock
- Marc doing what he loves

Well it's pretty much ready now for the paint/panel work to be done, and have worked out from a fitting session of the QF's that I'll be needing the 50mm widebody guards at the rear. See seperate post for details and photos.

Well, I had the turbos off the GT-R rebuilt through Per4manz Turbochargers a couple of weeks ago, and they've now been sold to a chap in Queensland I think (07 area code). This is the last item that can be sold from the GT-R after selling the gearbox last week (that guy got a bargain).

So, haven't been able to do much in the way of the Silvia being Fathers Day last weekend and all, and this weekend I have Charli to look after so finding it hard to get down to the workshop. Have asked Jeff to get the boys to start looking at the engine. Forged internals will be coming, and will be getting the bottom cryo treated as I did with the GT-R engine. Also looking at getting the pistons ceramically coated too.

Decisions to make will be how far I go with the head also, with the engine I have it has already been ported and polished, but whether or not I get Step 1 or Step 2 cams will determine if I need to replace valve springs as well.

Feel free to make comments on my blog - feedback on what you think I could do is always welcome. 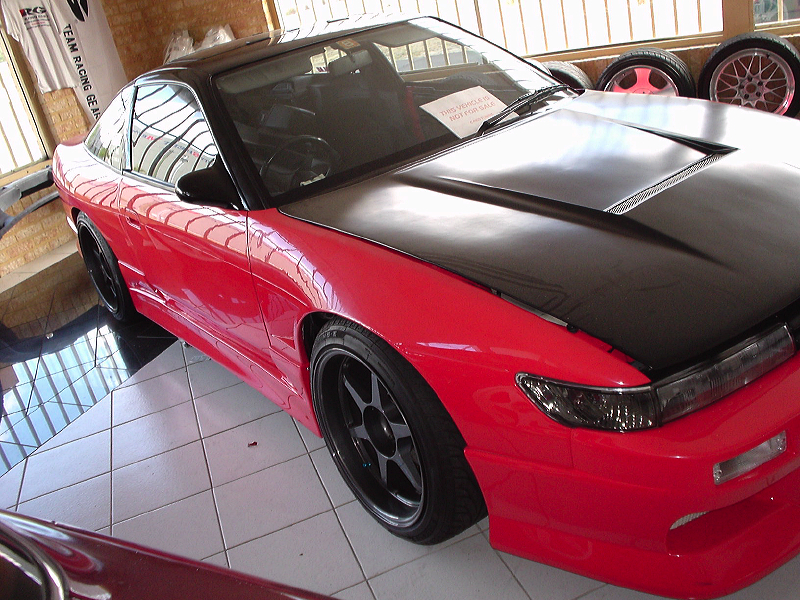 I'd forgotten that back in May I did a couple of tests of the 18x10 (+12) P1 Racing QF's on a couple of different S13's. The first was the C-Red Driftpig v2.0 (Sileighty), the second was Joel's 180SX. With the Driftpig, the front rims stuck out considerably mainly because of the spacers required to clear the coilovers. The pictures you see show the suspension set with maximum -ve camber (about 7degrees!). The rears fitted, and needed 15mm spacers to fill the rear guards (which are 30mm wider Wise Sports. However the rear of the Driftpig also has an R32 GT-R subframe fitted - this may be the reason the spacers were required. Another test fitting of the QF's will be coming up soon on the shell once we fit up some 5-stud hubs.

Joel's 180SX didn't have front coilovers fitted, but did have a 5-stud conversion, this the reason why the rims didn't require any spacers. The guards on Joel's car I believe are 30mm (could be 20mm), and having a look at the ruler, it would seem that for 10" rims at the front, I would need another 30mm or so of guard. Thankfully we'll only be going 9" at the front.

BTW, the front bar you see on the Driftpig is more than likely what will be fitted up to the 'Silbeer'. I rolled the shell out that will be turned into a true 'brenspec' Silvia on Saturday. Started out by removing the headlights, front and rear bumpers, side skirts and cleaning out the interior. The front Nissan Aero Sport bar has certainly seen better days, so I'm afraid I won't be using it. Has had too many hits and there's too much bog on it for my liking. The side skirts likewise have taken a couple of hits, and removing them wasn't too easy and have torn a chunk away from inside the door sill area. Once the skirt were removed, a hit has been revealed under the body - but this is easily repairable.

Next is to strip the engine bay of everything including the harnesses so it can all be painted at the same time. Aiming to send it off in about 2 weeks if I've managed to get everything done that needs to be done by then.

NOTE: This is not my engine.

Just came across someone who's done their SR20 rocker cover in black wrinkle finish paint, I think it looks very cool, although I may be going red instead of black myself:

What does everyone reckon?

No biggy, but I've noticed that the GT-RS kit I bought was specifically for the S14/S15. Apparently the S13 kit comes with the inlet and compressor outlet adaptors too.

Thanks to 'orbitor' on nissansilvia.com for the use of the picture. Well it finally arrived. Could have picked it up Tuesday according to the Australia Post card but we only got it in the mail this morning. Hadn't even been cracked from the HKS factory so all is good on that front. It's a beautiful turbo too, and to prove it here are some pics (they're big so apologies to dialup users):

Can't wait to strap this baby on.

Another set back - and it seems the curse has been passed onto the turbos, I had them checked at Performanz for a prospective buyer only to find out they need to be rebuilt. So, although it will cost money, I need to sell them rebuilt to make enough out of them. Will also try and recoup costs in the final pricing.

At least I'll feel comfortable in selling them once they've been rebuilt.

UPDATE ON OTHER PARTS:

As for the other parts that are left, well, there's the air filters and adaptors, gearbox and turbos that are left. I'm thinking I may as well just keep the filters for the Silvia, and the exhaust which I thought would never go went on Saturday. Unfortunately out of the money I've made on selling the parts, I have had to purchase the bunky for $1500 and have paid close to an additional $1500 for parts and labour to get her running well again!

Oh well. I've managed to pick up a couple of private jobs lately which should help the cause.

HKS GT-RS Turbo on the way!

Well, I found a sweet deal on www.nissansilvia.com for an HKS GT-RS Turbine Kit (for SR20DET) at only $2350 delivered within Australia. I couldn't pass it up so I got it asap. Should be here next week. Got this through Flying Performance International in Sydney:

Here's a quick product speel on it:

HKS just released another full ball bearing turbocharger GT-RS. This kit is an upgrade over the GT25/40 with alittle bigger turbo specs, retains full ball bearing capability and great for spool up and anyone looking for a potent street vehicle.