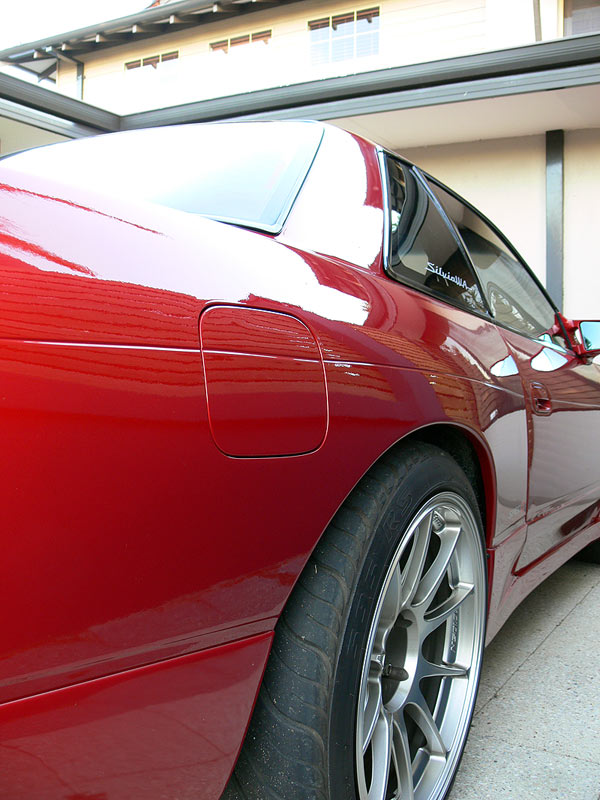 One of the many things I love about the car, is its 'factory look'. An obvious way I did this was by using the Nissan Aero kit, which is now becoming quite a sort after item. But a couple of other ways was the filling of the front guards original vent holes (a necessity with the A-pillar braces behind) and the way the Tom modified and fitted the fuel filler cap to make it look factory. You see when you normally do widebody guards, you would use the supplied fuel filler cap which bolts up in the original located and looks like an after thought because it has chamfer on one side to clear the body. Here's an example:

I don't want to say that this car is by any means less worthy, it's a very nice ride. But in my case, the extra effort that Tom made in building up the flap with a small amount body filler and shaping it to suit the new rump really has made a huge, if mostly unnoticed difference...what you want really.

Here's some close up pics on how it looks/works:
- With the fuel flap open
- Closeup of the hinge, silicon hose used for spacers/bolt covers
- Screws used to set the stop point
- Closeup of the stopper screws
- Just a fancy shot of the Spec-B badge while I was at it

The spring on the inside of the flap needed a bit of adjustment so that when the fuel filler flap catch inside was pushed, it popped open. The final product though is just perfect. Thanks Tom.

Hey Brendan, great to see you have built an S13.
Sent you an email, not sure if it was the right address.
Use to talk to you years ago when we both owned GTR’s.
Send me an email at .(JavaScript must be enabled to view this email address)

Any updates? I’ve been following your build for a while. The car is absolutely beautiful.

Sorry about that. Have just been driving the car and very busy with work at the moment. All is going well though, will finish mounting the boost gauge finally this weekend, and I have Perth Autosalon on next weekend so I’ll be in drastic cleaning mode to get it all ship shape in time. Will make sure I post an update after Autosalon.

Hey Brendan, you’ve got a beautiful ride. I’ve been looking for a quality looking widebody set up for my s13 but have been unsuccessful, until I saw Sillbeer. Where could I possibly find something like that? I have spent hours searching with no luck. Would appreciate a push in the right direction.
Thank you for your time,
Mike.

When you say ‘widebody setup’, what are you referring to? The rear widebody quarter panels and front guards?

Ya, I was referring to the rear quarter panels and front guards.

You will need to find someone to bring them in for you, or try and find a local distributor. Note that on the front guards, I deleted the vent because my A-pillar brace was fouling on the vent when trying to be fitted.

A-Pillar Brace (shame Zenith is no longer around)
http://www.sillbeer.com/blog/entry/brace_positions/