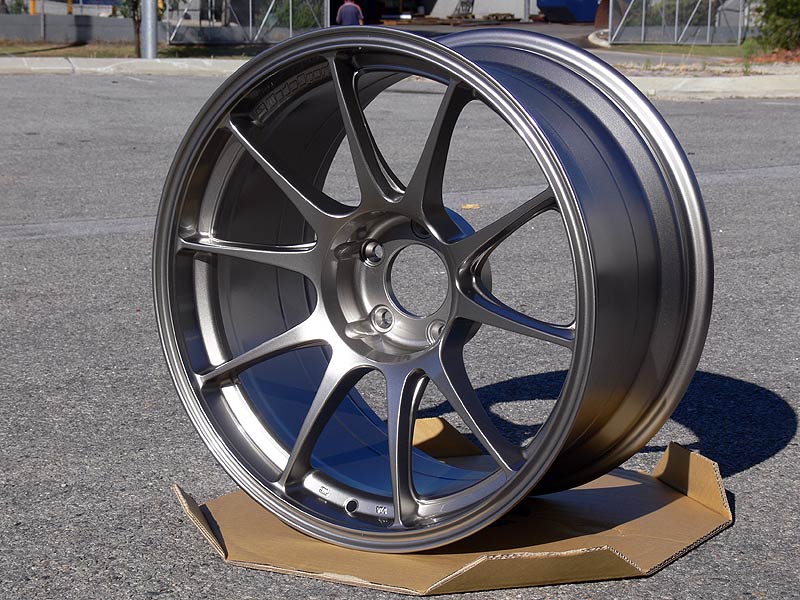 The call came about 11.00am last Friday morning from Jeff Ash at C-Red to say my wheels had arrived at the workshop. Although I felt like jumping in the car and racing out there to see them, I held off and waited until Saturday morning.

And was the wait worth it...abso-freakin-lutely! For those who haven't seen previous posts, they're from Japanese manufacturer Weds Co Ltd, and are part of the WedsSport range called the TC105N (released in 2006). These rims are just gorgeous and will suit the build down to a tee. They're very race oriented, with minimal obvious dish, and a spoke the goes from the outer lip into the centre hub which is very important for me aesthetically. The colour, which is best described as Titanium Silver (TS colour code according to Weds). The sizes are as mentioned before:

They're seriously light and very well made. Here's a selection of pics to help you get a feel for how nice these are:

The offsets were always going to be hard to guess, especially with such a wide car (as it is now), but we nailed it I reckon. Not that we had much choice we ordered them as big as was available. When it came time to fit them up, I was a little disappointed with the amount they say in the guards, but on closer inspection, it was more that I had not adjusted the camber arms or lower control arms as yet. Here's a couple of shots before and after the adjustment:

The front is on and sitting out from the guards just a smidge, but again nothing has been adjusted yet and we have about 2-3mm clearance on the coilover at the moment.

And check this out, it shows how much width I really have front and rear...it just looks so brawny it's nuts! It even has glimpses of GT-R in the rear now.

While in on Saturday, by myself mind you, I managed to get the rear Brembo's fitted up. The pins and retainer clips required a bit of scrubbing with a metal brush to remove some of the baked on brake dust, along with a quick polish. The rear's now fill the rims very nicely. Will get on the fronts this week. 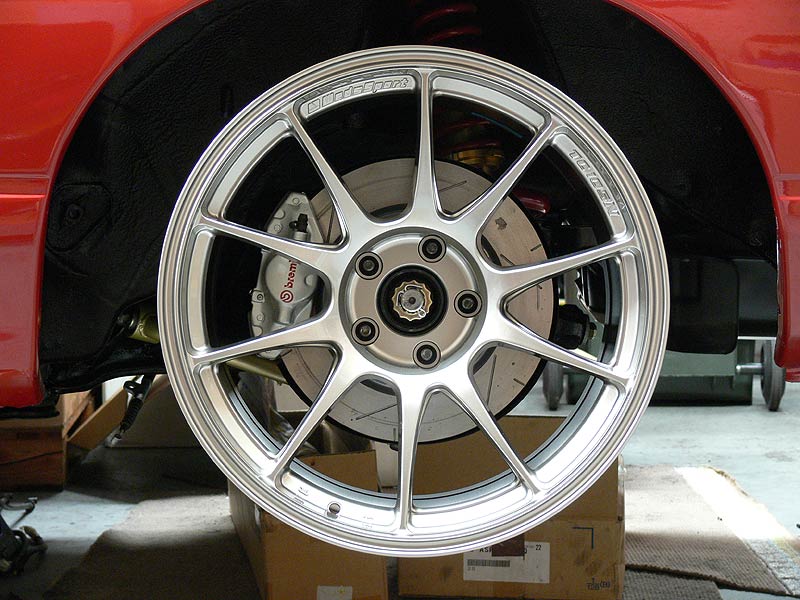 It's been an exciting time getting the rims because it really shows we're getting close now. Just finishing off a couple of private jobs at the moment so I can purchase a few things for the interior (Dynamat, headunit and retrim) so that I have a nice comfy and relatively quiet and cool driving environment.

« Next: And now the wheels are on...new hotness!