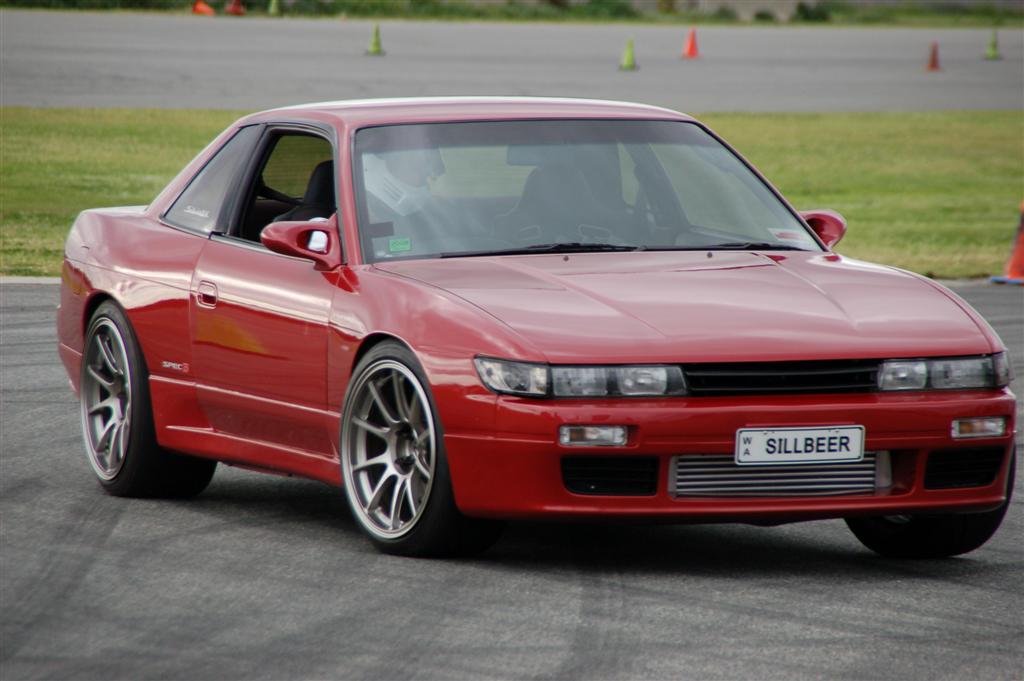 Back at the end of August, SilviaWA had a 'Driver Training' afternoon at the AHG Driver Training Centre out near Perth International Airport. Although they have a short circuit, this event takes place on one of their large skid pans with the addition of a set of cones laid out in a pre-defined course. There were about 15 people taking part in the afternoon and I took along a video camera to capture some of the event. The tricky part of this type of driving is remembering the course you need to take, and thinking ahead a couple of corners so that you set the car up on the right part of the track to make the best time. Check out the video below:

Photos from the event:

This being the first time the car has been really pushed hard, it showed up a few problems in both engine tune and suspension. With regard to the engine tune, whenever I took it close to or up to redline (which was very often), then next gear change or off throttle would cause a dropped cylinder and time is lost from having to wait for it to clear up again. This also caused problems on the end corners as the engine wanted to stall leading to compression lock-ups and the back end coming around a little more than expected. This will be looked at soon though by doing some additional tuning off the dyno and on the road.

For the suspension, I was still really running the settings I put in to get the car on the road, so it was expected that it would need some tweaking. The rear especially was wanting to come around too quickly considering the amount of rubber. I put this down to the +0 camber that was setup originally leading to the rear tyres rolling a bit too much up onto the side walls. Since the event, I've taken it to John Fowler and his colleague Bob at Wheels World in Osborne Park for a proper dial in. With the instructions of intent being most daily driving with occasional track sessions, the results were pretty good. With daily driving feeling a lot more confident and refined, and when pushed where I could, the rear staying in check really nicely.

The brakes on the car performed really really well, with the only problems being me being a little overzealous when heading into some of the corners causing slight lockups. Braking into the garage though, I could really step on them hard and the car pulled up perfectly. The Nismo pads that are running really work best once warmed up.

Next track outing will be an unofficial one at Powercruise coming up in October. Really looking forward to that followed by a full track attack and possibly some drag strip time if I can get the tune sorted.

The project came out beautiful.

Do you have an email where I could ask you a question about it?

My email .(JavaScript must be enabled to view this email address)
——-

Man, this build is absolutely phenomenal!  This car is so clean i would eat off the transmission and steering rack.  I am EXTREMELY impressed with your attention to detail, sparing no expense whatsoever it seems.  I though my project was time consuming.  My v8 s13 doesn’t even compare to this.

.(JavaScript must be enabled to view this email address)