Engine & Gearbox is out 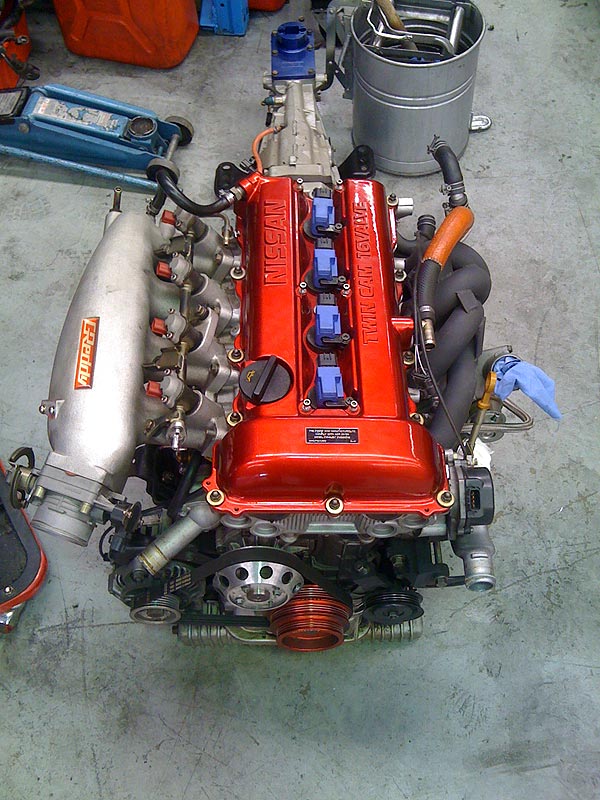 Well it's been a few months since the car broke and was sent to the workshop corner for its misdemeanours...or is that my misdemeanours? Anyway, the boys at C-Red have been very busy and also been on holidays so my project was put on hold while they cleared their backlog of work. Having said that, I've been stupidly busy as well...this being my first year working for myself (since Decmber 2008), and I'm happy I've been busy too. Unfortunately it left little time to work on getting the Silvia sorted.

A few weeks ago I got in and removed all the ancilliaries from the engine ready for it to be removed. Now why am I removing the engine you may ask? Well if you've been following the blog, last year I reported problems with the engine, specifically the head and have been meaning to replace the head for some time. As the gearbox had to come out, and it's much easier to work on the engine with it extracted from its home, the whole package has been removed.

As you can see at the front, there's a fair amount of oil mist coming from around the GTi-R Oil Pump. Still yet to decide what to do about this, whether to try and fix or replace with an S13 pump again. Replacing the pump though means I'll need to get a new crank pulley. But they're all decisions we can make once the engine has been torn down which I will be doing over the next few weeks.

With the engine out, I'll also be cleaning up the engine bay back to top shape ready for it to be re-inserted.

Previous: A day at the racetrack...specifically Barbagallo Raceway »