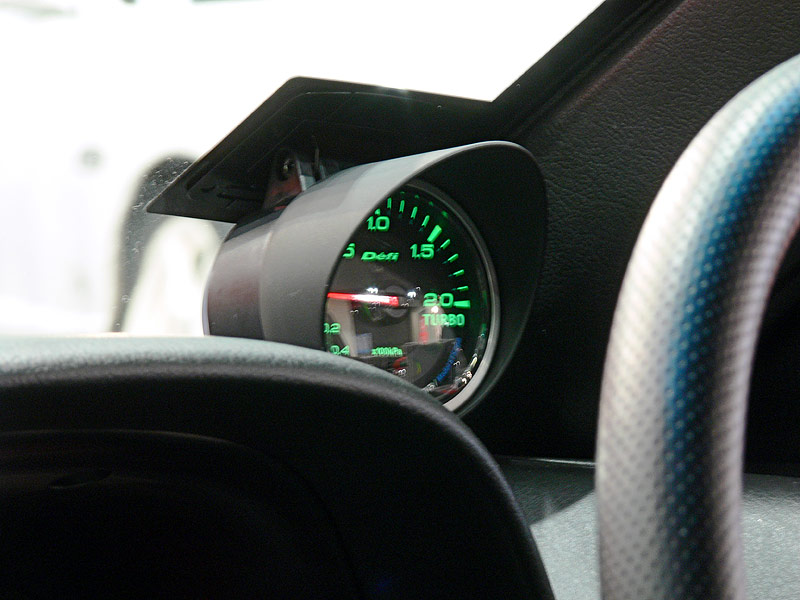 With the impending Perth Autosalon around the corner at the time, I thought it was a prime opportunity to finally get off my bum (again) and install the Defi-Link Turbo Boost Gauge.

I've had the link cable for some time that would connect from the Defi-Link Controller to the gauge, but to install it you need to remove the main gauge cluster...thus the procrastinating. Anyway, I unscrewed the various bits of trim from under the dash, steering column and cluster, and removed the main gauge cluster from it's position. Using a small cable snake I taped the Defi-Link extension to the end of it and poked it through to the glove box where the Controller is stashed. Then I removed the trim from the A-pillar and poked the other end of the extension cable up the corner of the windscreen/dashboard as I knew I would mount it somewhere there, just wasn't sure where.

Now while the gauge cluster was out, it was a good opportunity to fix the fuel gauge which has been on the piss ever since I frigged with it a few months ago. Basically I fiddled with it and it ended up going way off the dial on a full tank meaning empty was somewhere around 1/3 tank. Before I started in the morning, I stopped by the petrol station and filled right up. Then I plugged the cluster back in and turned the ignition. The needle is really just a slip fit over the spindle so with a bit a tweaking and waiting for it to normalise I had it spot on.

Back to the boost gauge. I wanted the location of it to be reasonably out of the way while being easy to read. I hand held it in a few locations such as the A-pillar and the top of the dash and none of the spots seems right. I got some feedback from Marc at C-Red and the suggestion was made to stick it to the windscreen in an upside-down position so to speak. As I was going to be sticking it to the screen using the supplied double-sided tape I thought it would be best to cut some black vinyl so the gauge cup foot wouldn't be visible from the outside. And it worked. After lining up the vinyl, marking positions to stick to I fitted the gauge holder/cup, the Single Visor (gauge hood), fed extension through to the gauge and finally pushed it all into place. I think this setup is just ideal.

From the outside, you would hardly know there's an additional gauge there. The fitting of it upside down there does not interrupt airflow coming from the side firing window demister vents, and when you look at it from the driving position you're looking straight down the barrel of the gauge...WINNER!

As you can see it's really tucked away nicely which is perfect.