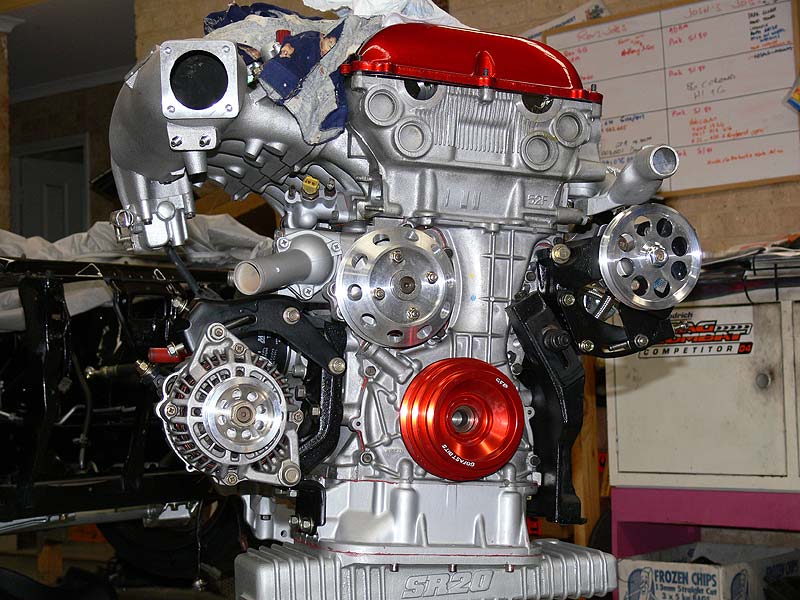 So as Greg has been working on the engine and gearbox over the last couple of weeks, it's been my task to find and clean up a starter motor, alternator, power steering pump and airconditioning compressor. The finding bit wasn't too bad, a couple of weeks ago I tracked down an S14a engine that was FUBAR, but had good bits left over, so off came the alternator and power steering pump...and as it was an S14a, the parts were relatively easy to fix up. There was an auto gearbox nearby with a starter motor in good condition, and after a quick scrub to eliminate the usual alumunium corrosion marks it was good to go also. That brought us to the aircon compressor which was a bastard to remove in the tight confines of an engine graveyard...with many bruises on my left arm to prove it. This wasn't looking so flash with many years of grime all over it. This needed a good couple of hours with the brass brush to clean up, but it still wasn't fantastic. The good thing I suppose being that it wouldn't be seen much from up top anyway. Note in the above pic, the genuine Trust Sump is now on.

After giving the majority of the mounting bolts a bit of a scrub too, I replaced the dull ones temporarily in place on the engine and then proceeded to bolt up these parts. Most went on pretty easily, but the S14a Power Steering pump uses a different slide plate, so I used it rather than the S13 one...all good.

And so here's the obligatory pics: 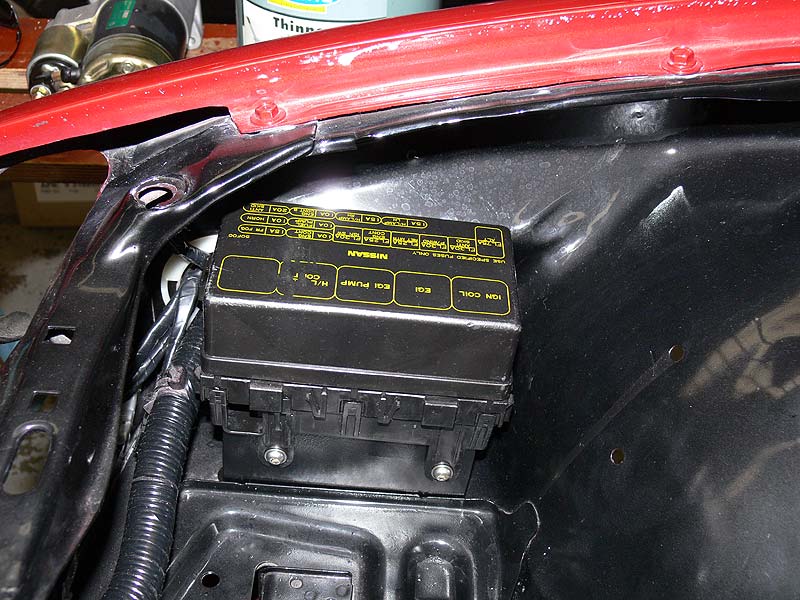 Now onto some of the stuff that Greg has been doing. That big hole where the engine goes is slowly being fitted out...but not because Greg's slow, but because he's got to find the bits, then clean them, and finally fit them. So far the power steering lines, most of the brake lines and aircon lines have been run along with fitting of the brake booster and clutch master cylinder. Unfortunately the Z32 Brake Master Cylinder that came in was for an Australian model, where we need the Japanese version which has the 3rd output for the front brakes, rather than just two which is fine for ABS equipped cars. The wiring looms are also now in place, and the fuse box has been moved to make more room in the engine bay for other 'stuff'.

Much of the original clips that were in place will also be replaced with new ones, as even good condition used ones have now been affected by many years of heat cycling and are as such quite brittle and prone to breaking.

There was a possibility of fitting the engine and gearbox this week, but due to unforeseen parts missing that need to be found, we'll be delaying that action a couple of weeks now until all is completed on the engine.

In regards to the interior, I'm now in two minds about the dash treatment and the triple gauge hood. Although it would look mintox (haha, have used that in a while), it's going to take a long time to get right...and not cheap either. In the meantime, though I'm looking at using a Defi DIN Gauge and keep working on the dash as something special, maybe in time for one of the major shows. I want to keep going on with the larger gauges as they do provide warning indicators which are very handy in a high performance (here's hoping) car such as Sillbeer.

Until next time amigo's, adios.

Previous: Getting in gear, and hooding up »